Lower West Pubnico, Nova Scotia At 2pm, Sunday, April 28, 2002, the long awaited interpretive panel on the Tern colony of The Brothers was officially unveiled. During the unveiling, I said a few words about The Brothers and their significance as one of the Important Bird Areas of Canada. I spoke of all involved in the process of getting the panel placed here. The details are all listed below.

I was very delighted to see the crowd who came from near and far to witness the event. The Nova Scotia Bird Society was well represented by Andy Horn, its president, and by Gisèle d'Entremont, its past president.

After I had spoken and introduced the crowd to some of its attendees including Azor Vienneau, the painter of the background illustration, Gisèle, speaking on behalf of the Bird Society, said a few words and to my great surprise, presented me with Azor's original painting, beautifully framed. It was truly unexpected, and eventhough I felt unworthy of the gift, I accepted it with delight and it will always be treasured.

After the short ceremony in Lower West Pubnico, the group gathered at the Musée Acadien for snacks and chat. All went well. I gratefully acknoledge all who were in attendance.

Location: At the end of Pond Road in Lower West Pubnico, Nova Scotia, in plain view of The Brothers.

The undertaking of the project was through the sponsorship of the Important Bird Areas (IBA) program with sub-sponsorship by the Nova Scotia Bird Society (NSBS).

Due to the fact that these islands represent the largest and the most stable population in Canada of the endangered species, the Roseate Tern, IBA designated them an Important Bird Area in 1999.

In that same year, Roland Chiasson, the IBA coordinator for the Maritimes, approached me about the erection of an interpretive panel about The Brothers to be placed on the mainland in plain view of them. Not knowing fully what I was getting into, I agreed to his plan. Little did I know this one year plan would drag into more than two and involve so many people and organizations.

The NSBS got involved with me and the project got going. Many e-mails, meetings and phone calls later, the project is now complete.

The complete list of volunteers and contributors is listed at the end of this document. However, some of them I must mention here.

First and foremost, the illustration was painted by the well known Nova Scotia artist, Azor Vienneau, which he donated to the NSBS for the project. Pubnico resident, Richard Cunningham, graciously allowed for placement of the interpretive sign on his land, once owned by his grandfather, Pierre à Dick d'Entremont.

Members of the NSBS, Canadian Wildlife Service (CWS) and the Nova Scotia Department of Natural Resources (NSDNR) donated their time to helped me with the text which was then translated into french also by CWS.

The graphic layout was by Burke and Burke Graphic Design of Halifax with feedback from Gisèle d'Entremont and Peter Richard of the NSBS, and myself. They also donated their time and expertise. At the time, Gisèle was the president of the NSBS.

The funds from IBA covered the expenses of having the illustration digitally scanned for use by Burke and Burke, for the construction of the panel by Atlantex Creative Works, for the aluminum stand and the concrete base upon which it has been attached, and for the fill required to improve the access road and parking area.

The IBA program is an international initiative coordinated by Bird Life International, a partnership of member-based organizations in over 100 countries seeking to identify and conserve sites important to all bird species world-wide. Through the protection of birds and habitats, they also promote the conservation of the world's bio-diversity. There are currently IBA programs in Europe, Africa, the Middle East, Asia, and the Americas.

The two tiny islands which make up Brothers have the largest significant population of Roseate Terns (Sterna dougallii) in Canada. The islands are also home to Arctic Tern (Sterna paradiseaea) and Common Tern, (Sterna hirundo) of which many biologist believe they need further protection because of their declining numbers. In 1999, the Roseate Tern was upgraded to Endangered Species status by the Committee On the Status of Endangered Wildlife In Canada (COSEWIC). It had previously been listed as Threatened in 1986.

I have personally been involved for over 20 years as a self-appointed steward of these island's tern colony. Working under the direction of CWS and the wildlife division of the NSDNR, I have been conducting nest and chick counts as well as general tern observation. In 1982, Roseate Terns were first identified as nesting on The Brothers. I was asked to join the Roseate Tern Recovery Team in the late 1980's. Since then, I have been placing Roseate Tern nesting shelters on the islands and monitoring their use.

Roseate Tern nest numbers have increased from 20 in 1991 to 86 in 2000. In 2001 the number had decreased to 70 even though the total number of tern nests (all three species) had increased to almost 900. [See http://pages.ca.inter.net/~deonted/tern01.html on the internet for more detailed info] The Brothers still has, by far, the most stable and largest Roseate Tern Colony in Canada.

Terns are often confused with gulls. With some more education the profile of terns as graceful and energetic and fun to watch can be easily portrayed. The panel depicts the three tern species in its foreground with The Brothers in the background.

The Roseate Tern (Sterna dougallii) is a slender, medium-sized seabird with a forked tail flanked by streamers. In breeding plumage it is silvery-grey above and white below. The roseate colour of its under side is rarely visible. It has a black cap, orange legs, and a black bill which may be reddish at the base. In non-breeding plumage, the legs and bill are black, and the tail loses its streamers.

Atlantic Canada is at the northern limit of the Roseate Tern's north-eastern breeding range. There are only a few remaining sites where they breed regularly in substantial numbers: three off Nova Scotia and the other off Iles de la Madeleine. There are other scattered colonies along the coast of Maine and south to Long Island. They winter off the coast of South America where they roost on sand bars, leaving themselves vulnerable to human predation.

Roseate Terns usually nest adjacent to clumps of vegetation, under boulders, under washed-up wooden boards and planks and other driftwood where they can find shelter or seclusion. They like the proximity of others of their kind and therefore form a sub-colony within a tern colony . Roseate Terns usually lay one or two eggs, rarely more. Both parents take part in brooding, feeding, and caring for the young. The eggs are laid 2 or 3 days apart, and hatch accordingly. The nest itself may be a shallow scrape with little nesting material, however on The Brothers, the nests generally contain more plant material than those of Common and Arctic Tern's. Pieces of plant stalks (6 to 15 cm long) from previous years growth give the nest the appearance of varying amounts of matted straw.

Conservation history on The Brothers

The first time Roseate Terns were noticed by the local birders was on May 26, 1983 when a group of us, on our yearly census visit to the island bird colonies, stopped at the Northern Brother. Delisle d'Entremont of Lower West Pubnico spotted about 40 Roseates, from a colony of 1000, mostly Common Terns. Since then I have been monitoring the site. The Brothers have consistently supported one of Canada's largest Roseate Tern colonies. Numbers have been at a low of 20 pairs in 1991, but have subsequently experienced a steady increase likely due to active conservation efforts. On regular visits during the breeding season all gull nests are removed (under permit).

Tern nesting boxes and other man-made shelters were installed and are still being maintained. Roseate Terns generally prefer more nesting cover than Common or Arctic Terns.

The earlier nest boxes consist of a three-sided, 13 cm high box that is turned upside down, and weighted with rocks.

Other materials are also used as nest shelters, include washed up lobster crates and pieces of plywood.

The success of these efforts has been demonstrated by the increasing Roseate Tern population at this site to 86 Roseate Tern nests in 2000 and 70 in 2001.
This is a good time to mention a bit of history about The Brothers and their local name of "les îles-à-Vert" by the french speaking community.

These two tiny islands about 1 km to the west of Lower West Pubnico were at one time owned (or at least one of them was owned) by a Mr. Bradford Green. People being people, and the colour green being easily translated into french with the word "vert", the islands soon became known as "les îles-à-Vert", meaning essentially, "the islands belonging to Mr. Green".

This was in the 1700's and it still remains today to most of the villagers of West Pubnico. 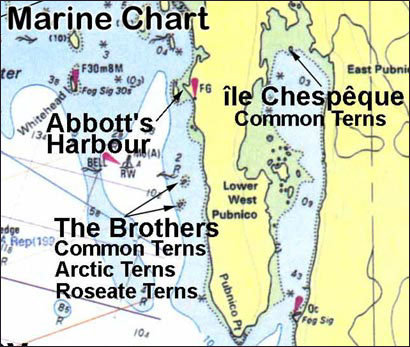 Marine charts for over 200 years referred to these islands as the "Twin Islands". The recent charts list them as "The Brothers".

Aside from the inevitable awareness and education of the locals and tourists alike to the terns and to the tern colony of The Brothers, it is my hope that the panel will complement the other tourist attractions of the area as a destination point. These include Le Village historique acadien de la Nouvelle-Écosse (Historical Acadian Village of Nova Scotia), the Musée Acadien, the local wharves and other tourist attractions of the Pubnico area including the local people themselves.

The IBA program is an international initiative co-ordinated by Bird Life International, a partnership of member-based organisations in over 100 countries seeking to identify and conserve sites important to all bird species world-wide. Through the protection of birds and habitats, they also promote the conservation of the world's bio-diversity. There are currently IBA programs in Europe, Africa, the Middle East, Asia, and the Americas.

The Canadian BirdLife co-partners are the Canadian Nature Federation (CNF) and Bird Studies Canada (BSC). The Canadian IBA program is part of the Americas IBA program which includes the United States, Mexico, and 17 countries in Central and South America.

The goals of the Canadian IBA program are to:

1 Identify a network of sites that conserve the natural diversity of Canadian bird species and are critical to the long-term viability of naturally occurring bird populations;

2 Determine the type of protection or stewardship required for each site, and ensure the conservation of sites through partnerships of local stakeholders who develop and implement appropriate on-the-ground conservation plans; and

IBAs are identified by the presence of birds falling under one or more of the following internationally agreed-upon categories:

3 Sites regularly holding an assemblage of species largely restricted to a biome.

4 Sites where birds concentrate in significant numbers when breeding, in winter, or during migration.

The funds for this project were received from IBA and at least in part through a millennium grant from the government of Canada. We, on the other hand, had to come up with a similar amount from donations to the project and monetary values placed on "in-kind" work.

Contributors to the project - other than funding

Roland Chiasson and Sabine Dietz - IBA coordinators for the Maritimes

the Nova Scotia Bird Society
Gisèle d'Entremont (text, layout and major decisions. Gisèle was the president of the NSBS through most of the project and worked closely with me)
Peter Richard (text and layout)
Bernice Moores - Treasurer of the NSBS
The NSBS executive

Richard Cunningham - granted us permission to use his land onto which to erect the panel and build a small parking area.

Burke and Burke Graphic Design - Layout of text and illustration

Atlantex Creative Works - Construction of the panel itself.

Amiro and Surette Trucking and Excavating - the road and parking area

Wallace R. D'Eon (my dad) - Helped me with the final installation

To all involved, a huge thanks for a job well done.